skip to main | skip to sidebar

The Shades to Transform a Tool

At the start of last summer, I caught a glimpse of who was to be my friend Rudy moon walking across the end of the hallway I was walking down. As he turned the corner he noticed me and stopped immediately. When we ended up in the elevator together I inquired about the sudden dance outburst and when he squeezed out a shy confirmation of my sighting I screamed something along the lines of "You like to boogie?! Me too!!"We ended up in a furious tango in that same elevator and during the dip my poor wayfarers sailed off my head and into the corner. They were finished. I spent the rest of that summer and every sunny winter day squinting. Now that spring and summer are fast approaching I need to sheild my eyes. Stylishly, of course. 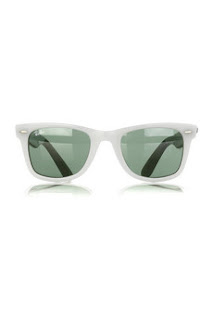 Perhaps I should get a new pair? Everybody has the classic black wayfarer but I think that this world has much too much hope for anyone to wear black. These ones are for the fresher crop. Ray-Ban Wayfarers $140

I still remember my first pair of plastic glasses, I begged to have them because my grandma wore plastic frames. I've only worn plastic frames ever since. Linda Farrow for Dries Van Noten- $300 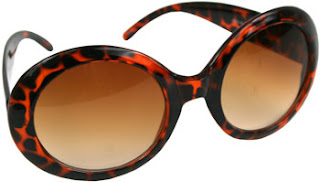 In times of crisis ask WWJOD? (What Would Jackie O Do?) Jackie O sunglasses- $11 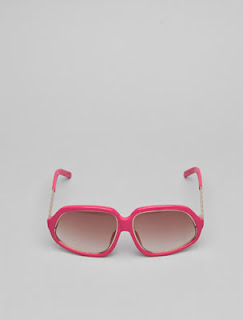 Did I ever tell you about my childhood crush on Elton John? Well it wasn't on the current Elton John but rather the incredibly flamboyant circa 1970's Elton John. I saw him on the muppet show and fell head over heels for what else but--his glasses. These will make me nice and nostalgic. Linda Farrow + Eley Kishimoto Sunglasses- $210

These make me want to buy a condo in Florida. I happen to think they are just spectacular.
Swan Lake Sunglasses - $11
Posted by Bonnie Klyde at Wednesday, March 25, 2009

Thanks for commenting! I promise to return the favor!